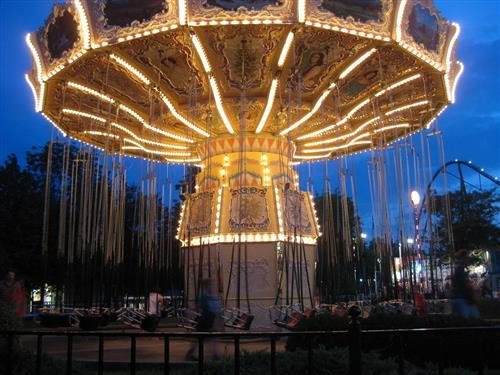 "Kings Island Amusement Park opened its doors in 1972 and is rumored to have the Dog Street Cemetery on its premises. Most witnesses believe the hauntings come from those who accidently died at the amusement park, like the 1976 occurrence where a Lion Country Safari Ranger was killed by a lion or Black Sunday in 1992, when a man, his friend and a security guard were electrocuted in a fountain that apparently had some unknown electrical problems. A woman who was on the nearby Flight Commander turned to look at all the commotion in the fountain, and fell out of her harness, plunging to her death.

The ghost of a girl in period blue dress (Tram Girl) has been seen around the parking lot or admissions area after hours. A little boy ghost who goes by the name of Racer Boy has also been seen wearing white near the Racer coaster. The boy is believed to be attached to some of the Racer cars that originally belonged to a Coney Island ride called Shooting Star, on which a little boy was found dead on the tracks, after falling from the ride.

The Eiffel Tower is haunted by the ghost of Tower Johnny, who had been visiting the park in 1983 on a grad night event when he fell down an elevator shaft while exploring restricted areas of the Tower. Today he is the blame for electrical issues and employees call unexplained tripped sensors ""Johnnies."""