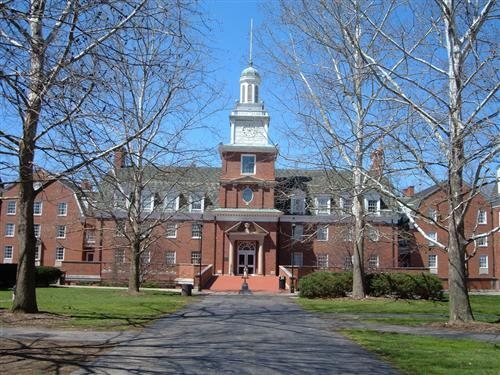 Claimed by some to be one of the most haunted places in the world, this university is believed to be haunted by spirits from the former Athens Lunatic Asylum. After opening in 1874, the asylum quickly became overcrowded, and rumors swirled around the treatment of the patients within. In December 1978, patient Margaret Schilling went missing, and a month later her body was found by a maintenance worker. It is said that a clear imprint of her hair and dress are visible on the floor where she was found, despite the area being cleaned repeatedly. The asylum is also allegedly haunted by the ghosts of the impoverished patients who were buried in anonymous graves in a potter's field. At one point in the field, the graves form a circle, which is said to be a meeting place of witches.

There are a number of different locations on campus that are said to be haunted, including the Brown House, where ghostly children can be heard splashing around in the long-gone swimming pool. Jefferson Hall is said to have a "marble sound," which happens most often on the top floor of the building and is the sound of someone dropping hundreds of marbles on the floor above you.

Washington Hall is believed to have an entire ghostly girl's basketball team lurking inside its building, but mostly in the hallway over the arch that connects the hall with Read Hall. Another version of this story includes a men's basketball team that haunts the top floor and the attic, which used to be a rec room.

Bush Hall is also said to have the "marble sounds," along with a poltergeist who haunts the place by turning the water faucets on and off and messing with the lights. At Shively Hall, a student in the 1970's was said to have participated in cult ceremonies at the nearby Hanning Cemetery, and when she stopped, she experienced a number of eerie things in her dorm room. Stories say she said she would have feelings of being pulled to the northeast, back toward the cemetery.

Voigt Hall, Perkins Hall, Cutler Hall, Crawford Hall and Wilson Hall are also among the spots on campus that have paranormal activity.